I have little teeth
in a box wrapped
in toilet paper,
the first my
children lost.

No photos really,
except for a few
I have saved
from other people’s
pages on social media.

After the divorce
I spun-out
pretty hard forgetting
that they were
sad too.

I have their little
teeth wrapped in
tissue paper in a box
in my room.

and I
tell her
I love her
the most
and that
she is
my best girl.

She says
I don't
but she is
and I love her
more still.

We drink
and cry and
she falls asleep
first and
I like to sit up
awhile and
watch her under
the glow of
my screen.

but she
will forever
be my best girl,

I love her the most.

Sobbing now she began to shake, she let the hand with the knife lower just a little and Ethan walked on over and took it from her and wrapped his arms around her, and held her.

"Shhhh", he said gently, as if talking to a small child and pulled back slightly to wipe tears from her face.

"Hush now", he whispered and delicately moved a strand of hair from her eyes.

She leaned forward and he kissed her softly on her forehead, and her neck, and her eyelids, kissing away the pain that lived inside of her always. The pain that told her that nobody loved her, and that everybody she cared about would leave her alone in the end. Just like they always had.

"Come on girl, let me get us a beer", and he walked with her holding her hand into the back room to the tiny little refrigerator that was beside their bed.

She laid down and he pulled out two Pabst Blue Ribbons and laid beside her.
" You always..." she started to say something but even the beginning was nearly too quiet to hear, then slowly she turned up the ice cold beer , drinking deeply from it.

"Yeah, and she was gone, and the house was full of crap because she was remodeling and we laid on a mattress in the front room and made love."

"... And there was plastic covering the windows and the wind kept blowing and making the plastic pop and I was so scared."

And both of them lay there and drank more beers and remembered that night, after the sex was done and the drugs had run out and it was just the two of them so far away from the crazy lives they lived a few blocks over, so far from the hustlers, and the kooks, and the thieves and the whores and all of the others that made up the circle of their association. And honest with each other for the first time they had talked.

She had told him about her father and his friends and her childhood, and her scars. How when she had finally gotten old enough to resist and say no to him, and how she wished her mother had not died, and how when he tired of her saying no again and again her father had poured lighter fluid on her and set her on fire, scarring her legs and most of her right side and all of her heart.
And he told her about his wife and kids and how the marriage had failed and how when he could no longer see his children he had given up on life and sunk slowly into the self imposed darkness that engulfed him now. And the drugs, and the crazy chances that he took to insure that he never went without them.

" I don't want you doing stick ups anymore. You'll go back to prison and I will be alone."
"Well, I don't want you turning tricks anymore..."
" It's the only hustle I have..."
"Well what are we gonna do- get straight jobs?"And they both smiled because he may as well have asked if they were going to sprout wings and fly to the moon. So he continued to steal and she to trick and the rest of the time they drank together and fed other hungers and tried to pretend that they could have normal lives.

They got a place together, small, only two rooms. The front a sort of living room and the back, a bedroom with a fridge and a hotplate, tiny bathroom off to the side. Somehow just having a place besides the seedy motels where they had always stayed gave them both a feeling of semi- stability, something that he had all but forgotten and she had never had. She prostituted herself less and less, only doing so when absolutely necessary and he no longer smoked crack which is not to say that he no longer used drugs and didn't drink now more than ever but that one demon at least was behind him. They had money for cigarettes, and rent, and even a weekly trip to Taco Bell- Joellen liked that. Ethan made friends with the neighbor, Segundo, who worked construction and sent money back to Mexico for his wife and children. Sometimes they would drink Modelo in the afternoons and Segundo would tell stories about his kids. Some nights the three of them would eat dinner together, but never at Taco Bell. Other times Ethan and Segundo would go to the cockfights over in the part of town where the Mexicans mostly lived. And Joellen only tried to kill Ethan when she got really drunk. Most days she would drink a half of a gallon of vodka, Aristocrat or Heaven Hill, but on other days she would get into Ethan's beer, PBR that he would buy in thirty pack suitcases and on those days she might still get violent. She had been into the beer today.

" I'm not going anywhere baby, I'm gonna stay right here with you."
She finished her beer and threw the empty can across the room and he laughed. She nuzzled closer her head laying on his chest, and he wrapped strong arms around her.
" Do you love me, Ethan"
" Of course I do."
" Why do you love me?", she asked,"Tell me why."
" I love you because you are the most beautiful women in the world, and because you are so very sad, I love you because of the smell of your hair and the sound of your laughter- I love you because you understand..."
"Understand what?"
"You understand me, how crazy I am."
" I love you Ethan," and she turned looking up into his face and kissed him. And passion rose up in them both and they fanned its flames until, exhausted they fell over spent. Joellen was fast asleep and Ethan smoked a Marlboro Red until the filter crushed between his fingers then sitting up reached for his chinos, and felt to make sure his wallet was there. Quietly he dressed and slipped out the front door and went to watch the roosters fight. 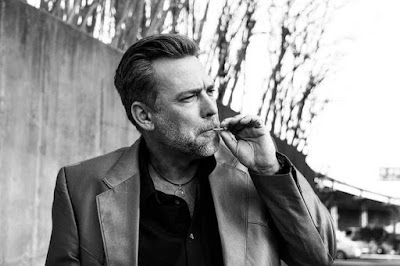 Justin Booth lives and works in Austin, TX . He has published multiple collections of poetry, the latest being “Outlaw Blue: Pimps, Poets and Preachers”  by Cowboy Buddha Publishing . A formerly homeless drug addict and state prison inmate, Booth gives poetic voice to the often ignored urban south. He talks of the beauty in the ugliest places, the despair of absolute poverty and the redemption of the human spirit. His plain spoken style and hypnotic use of meter allow us to join him in a bitter-sweet journey that takes us places where we have never been before.
- August 21, 2018