The Last Seaman by Don Robishaw

Roger leans on Scorpion, toweling off his tattooed gray-haired chest and beard. His big Harley Davidson sinking fast on a white sand beach. He lives for the beauty of the sea, changing tides and hues from blues to green, and the feel of both upon his face and arms. Sometimes the seas are combatively angry, like on that wintry evening. He often thinks of those mates — his lost mates — submerged in a WWII sub on the bottom of the sea. Other times the seas are tranquil, smooth as aged whisky, like today. Eight bells ringing out for Roger — the last seaman. Sipping a cold beer he says, “Hey mates. Belay that last order . . . ya hear?” 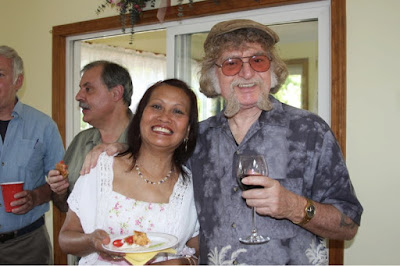 He likes to write poetry, satire, tragedies, and gritty fictional tales — of men and women from various backgrounds — that may have sprouted from a seed, from his past. Many of the characters he developed have been homeless, served for periods of time in the military, or are based upon archetypes or stereotypes he's met while on the road.