Hitler Time In The Facebook Diner. by Nick Gerrard

I crossed the street through the rain and peered in, wiping the mist off the window to get a peek.
A bustling 50's diner.
I could see little wooden tables, set for two but occupied by one.
I walked in.
No one turned to look; they were all busy typing away on little pop-up consoles.
I say typing but there was no sound as the keyboards were virtual, and floated.


The place was still a diner; waitresses dressed in fifties gear were bringing pie and shakes on huge trays above their heads.
Beers and shots were placed on little napkins next to the typers’ hands.


I weaved my way to the bar, a huge wooden thing with cool flashing beer signs, and climbed onto the high silver and red leather stool.


'Give me a Wild Turkey, hold the water, and one cube of ice, and make it a large one.'


'Sure.'
I took out my electric ciggy and inhaled the vapour.
I slid out my android and found the app.


The Facebook Reality Diner.
'That'll be seven dollars.'
'Seven dollars, shit!'
I fumbled in my pocket, counted out some crumpled notes, and flung them on the bar.


'Well, I’m logged into the App thingy and just reading the rules and that, I think I've got it but maybe you can give me the concise version?'


'Sure. Look, basically you go find yourself a table, then you log into your Facebook page as normal, turn on the App, and as well as seeing your normal page you get to see what all the people in here are posting.
And you can see everything and post anything. It’s like an internal Facebook page and everyone on it is in here.'


'Well, if you don't like anything anyone has posted, anything at all, you can comment or, and this is the best part, or, you can go over to their table and have a chat with them.'


'You say chat, but from what I can gather I am allowed to do anything, right?'


'So, let me get this straight, everyone in here has agreed to this?'


'So, basically I can shout at them, call them all the names under the sun, and then, I can slap them around a little?'


‘Only if they slap you right back.'


'Well, then each Friend has buttons in front of them, but unlike the original Facebook, there's a dislike button as well as a like button, and a fight button.'


'Yeah, I read that...what does that entail exactly?'


'At these prices? Shit yeah, hit me again.'


He poured a very large one this time, but charged no more.
'Cheers!'
‘Cheers!'


'Where was I? The fight button. Well, if after a few slaps and that you really can't come to an amicable agreement, or you just can't express yourself strongly enough in any other way, you press fight.'


'And I get to really fight the Friends?'


'Sounds great, tell me more.'
I took a long hit of the Wild and a huge inhale of vapour.


'Well, it's pretty simple, you press the button, and networking is suspended and anyone who wants can go with you and your friend and watch you fight it out.'


'No, man, cooler than that. We have a room made out like a back alley of a low-life bar in LA.'


‘Kinda like where Bukowski used to have all them fights?'


'And anything goes, right?'


'Yeah, but no weapons and no killing.'


'But I can basically beat the shit out of them?'


'Just stick your card details on the App where you registered.’


'You know I registered?’


'Yeah, of course, we have face recognition cameras at the door; if your face hadn’t been recognised you wouldn’t be in here now.’


'Big brother is watching man,
’
'Kind of comforting to be honest.
Hey, pour me another of those wild birds and grab yourself one, too.’


'Don’t mind if I do.’
One knew a good barman when one met one; felt like I had known the guy for years.
I sat down and logged on.
I spent a while browsing Facebook.
You know, the usual stuff; anti-government stuff, travelling pictures, cats, new and old music off YouTube, nothing out the ordinary.
I read and Liked for a bit, then switched to the Diner page.
I could see what people were doing, the people sat around me. .
I read, and then looked at the faces of the posters.
This was getting interesting.
After a while I started to really get into the posts.
Then I really got stuck in!
Philosophy on life, you know the kind of thing; the bloody Dalai Lama about harmony, or Bob Marley on woman, the usual crap.
Take that! Dislike!
Links to play games, shot down!
And then I got really into the comments, arguing with people.
Finally, I walked over to a woman.
‘Look, just because I didn’t like this stupid picture of a cat shaving a badger doesn’t mean I like cancer, you moron!’
Slap!
She sniffled a bit and I went back to my table and Turkey; this was great!


A guy was posting to 4Square. Not only where he was, but also what he was eating and drinking!
I pushed the fight button. A bell rang out.
A leggy blonde came and led me to his table, you know the type, the kind that prance around a boxing ring in-between rounds; big boobs underneath a tight white tee-shirt and little red shorts, right up her ars…sorry, I got distracted…anyway she led me by the tongue to the guy’s table.
I sat.
'Why the hell would you post that, man?’


'Why not? Are you for real? Cuss it’s boring shite, man!
Who cares what you are eating or drinking?
It wouldn’t be so bad if you were drinking anything interesting, like a rye, or a beer or even a fucking cocktail or something, but a de-caf latte! Who gives a shit?’


'Shut the fuck up, man! To hopefully make you stop posting crap like that again, I’m gonna take you into the alley and kick your de-caf arse!’


I had to Lol! I was taking him into the Bukowski alley, and here was me sounding more and more like old Henry! LMAO!


After I had finished with him, I went back to my table, sank the last of my glass and decided to switch to beer; if I was gonna kick a few more arses tonight, I’d better stay fairly straight.
I slapped a few more people around, hey, even one woman! I’m no sexist!
For, you know, the usual rubbish about Gypsies and Muslims.
When they got really racist, I took them in the back and whipped their arse.
Jesus, it felt good!
After a few hours, I logged off and went back to the bar.
I was a bit tired and decided to stop the brawling and return to some proper drinking.
It was expensive, but you can’t put a price on good company.


'Hey, our man from Chinaski land, another wild?’


'You seem to be having a good time out there...I had a feeling this was the place for you.’


‘This is just great, man, I mean I get to kick these idiots’ arses, there’s no hiding behind a screen in here.’


'Yeah, I was watching, you did some serious arse kicking back there...you use to go a few rounds, back in the day?’


'No, man, just read too many Short stories, and drank far too much whiskey, and got my arse kicked in far too many real back alleys. This is a push over.


Suddenly, there was wailing siren and flashing lights all around.


'Oh, shit…I think I forgot to mention this to you; I tend not to, else we would get all sorts of weirdoes in here, know what I mean?’


I didn’t, and moved my glass quickly out the way as he untied his white apron strings and vaulted over the bar. He patted my shoulder.


'Don’t worry, it’s just someone has written the dreaded line, the one that all cowards and all people without intelligence use.’


'You know, “what you’re saying is what the Nazis were saying in 1938.”
You know, the longer a conversation goes on, the better the chances of someone mentioning Nazis or Hitler.’


'And, now it’s Hitler time! This time we all go out the back, and kick the shit out of whoever posted it.’ 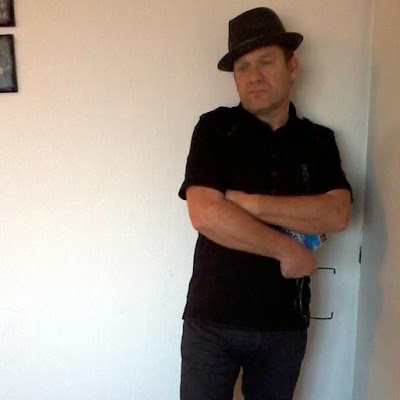 Originally from Birmingham but now living in Olomouc where he writes, proof-reads and edits, and in between looking after his son Joe, edits and designs Jotters United Lit-zine.
Nick has been at one time or another a Chef, activist, union organiser,
punk rocker, teacher, traveller and Eco-lodge owner in Malawi and Czech.
Short stories, flash and poetry have appeared in various magazines in print and online including Etherbooks, Roadside fiction, The Siren, Minor Literature and Bluehour magazine
Nick has three books published available on Amazon
twitter@nickcgerrard
- October 26, 2018