I take the final sip of Vermouth
and chew on the skewered olive -
I catch her eye again as her boyfriend
returns and they sit in silence,
before he finishes her bocadillo.

She’s made up
from the blood red lipstick,
to the fishnets
but her beauty is effortless -
an exotic night blooming flower
in this nocturnal zoo.

I wander up to the bar inevitably
stepping on sawdust and scurrying
cockroaches before eventually
paying the bill.

Outside, she’s lighting a cigarette
and I wader past her as she smiles
and I want to say something,
just one immortal poetic line.

Instead, I smile back and say...

Before I head off to the Metro
and the rest of my life -
certain that I’ll see her again some night -
most likely in a dream. 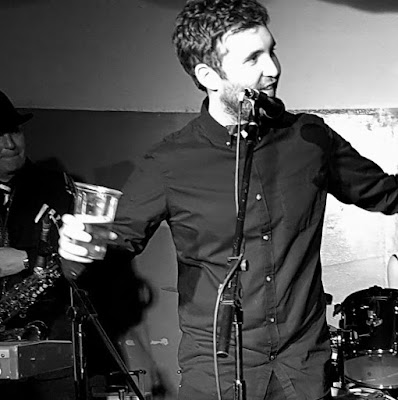 Gwil James Thomas is a poet, novelist and inept musician originally from Bristol, England. His work can be found largely in print and occasionally online in places such as 3AM Magazine, Punk Lit Press, The Beautiful Space and The Dope Fiend Daily. His most recent poetry chapbook is titled Romance, Renegades & Riots (Analog Submission Press) a split with the poet John D Robinson. He lives in Northern Spain.