My Allergy To Cats by Dave Newman

The football game is on
and the fat man
who has the drugs
is stoned.

At the bar everyone
looked like a dealer
but nobody had
anything to sell.

Outside there are sirens.
I don’t look like a dealer
and I’m not going back
to that bar.

“Buy me a beer for nothing”—
I should write that song
and sell it and get
rich and drunk.

I should kiss the fat man.
At least he’s honest.
He looks like a dealer
and he deals.

He loves Cool Ranch Dorritoes
in little bags
that cost 99 cents
and cans of Coke.

The fat man passes me a joint.
I am here for something stronger.
Perhaps I lack clarity.
I toke the joint politely.

Outside, the lights are flashing.
I bet the bar has gone empty.
The Jets score on the Patroits.
That’s New York and New England.

This is Pittsburgh, Pennsylvania.
The fat man’s cat rubs my leg
and I sneeze twice
into my elbow.

The fat man says, “Tissue?”
and hands me a box of Kleenex.
He says, “I have never
believed in guns.”

The fat man says, “Do you believe in guns?”
I’m okay with guns in other rooms at other times.
I say, “I’m pretty allergic to cats,”
but I don’t blow my nose.

I’m pretty allergic to lots of things:
cats and dealers and bars
where I’m not wanted
by dealers who don’t deal.

The fat man says, “New York Jets,”
like I’m supposed to know
what it means so I don’t mention
we’re watching  the wrong game.

The fat man says, “I used to have
six cats but no guns
and now I have no guns
but only one cat.”

It’s 80 bucks for a bag of blow.
The fat man thinks the Jets will cover the spread.

I take my bag and step into the light
which was not the light I expected.

There’s a fire somewhere, I see that now.
Maybe I’ll go back to the bar.
Inside my car, I open
a bag of Dorritos and sneeze. 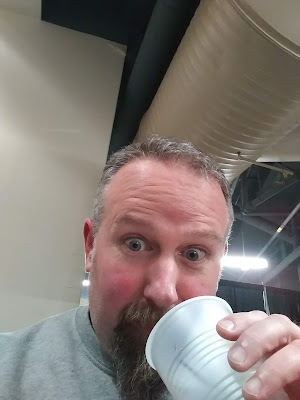 Dave Newman is the author of six books, includingPlease Don’t Shoot Anyone Tonight (Broken River Books, forthcoming 2018), the novella Sammy Drinks Canned Beer (White Gorilla Press, forthcoming 2018), The Poem Factory (White Gorilla Press, 2015), the novels Raymond Carver Will Not Raise Our Children (Writers Tribe Books, 2012) andTwo Small Birds (Writers Tribe Books, 2014), and the collection The Slaughterhouse Poems (White Gorilla Press, 2013), named one of the best books of the year by L Magazine. Winner of numerous awards, including the Andre Dubus Novella Prize, he lives in Trafford, PA, the last town in the Electric Valley, with his wife, the writer Lori Jakiela, and their two children. He works in medical research, serving elders.