Not All Cock and Bull by Gordon Cash


Reggie Villanueva went into the aptly named Cock and Bull Pub, folded his umbrella, and took off his raincoat.  He didn’t like bars to begin with, but the ops director had insisted he meet his contact here.  Sure enough, there she was, blonde wig, green dress, silver bracelet, perched on a stool.  The idea was to make their encounter look unplanned.

Villanueva had never picked up a woman in a bar in his life.  He thought most small talk was utter nonsense.  Nevertheless, he had learned it well enough to use it when the job demanded.  Now, he sat, leaving an empty seat between himself and the woman, and ordered Laphroaig on the rocks.  For a couple of minutes, he pretended not to notice her looking at him.  Finally, he acknowledged her with, “Nice weather for ducks.”  Vapid enough to get the ball rolling.

Anyone watching them move to a booth would have thought they were acting out a timeless, if tawdry, ritual.  Anyone would assume they chose the far bench of the very back booth for intimacy, not so they could view every other seat in the place.  Anyone would see Villanueva being a gentleman as he seated the woman first then slid in beside her, not as positioning themselves so they could exchange words and documents undetected.

As distasteful as he found the whole charade, Villanueva admitted the alternative was impractical.  “Bartender, I’m meeting a fellow saboteur here.  We need some privacy.” 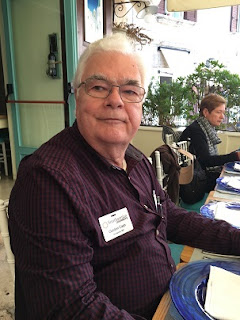 Gordon Cash is a lifelong professional scientist.  He lives in Annapolis, Maryland, with his wife and their six cats.