Young Man Dead in a Parking Lot by Hugh Blanton


They gather - sitting - standing - reclining -
on the fecal-stained sidewalk next
to the Del Mission liquor store.
Men - and  few women too - with nothing.
They can't afford even the airline bottles of liquor
on the other side of that wall -
but they sit there nonetheless - beseeching passersby -
'Spare any change?'
The more ambitious ask - 'Spare a dollar?'

One has separated himself from the others.
About a half block down the walk
in a slim strip of blacktop that serves as a parking lot -
right smack in the middle of the entrance - he sits cross-legged -
head slumped - chin in chest.
He has that special brand of sunken cheeks
that only crackheads can achieve.
The bits of dried grass and leaf clinging to his back
say he lives in the canyon at the end of 3rd Avenue.

A motorist exercising her right to park
honks her horn.
He doesn't lift his head -
doesn't even flip Ms. Motorist off.

Ms. Motorist on her cell phone demands
the police department get here this instant
to remove the obstruction.
'HE WON'T MOVE! HURRY UP!'

Cops and paramedics arrive in short order.
They get lots of calls in this neighborhood
and are never far away.
One cop tells his radio handset that subject
is deceased - no identification.
No-name dead guy is covered and shoved
into the back of the Rural/Metro ambulance.
The form of the sheet over him indicates
rigor mortis in its beginning stages. 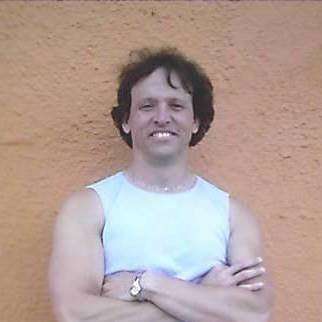 Hugh Blanton is a truck loader who combs poems out of his hair during those times he can steal away from his employer's loading dock. He has appeared in Bottom Shelf Whiskey, The Dope Fiend Daily, Terror House Magazine and other places.