Now, the beat of the drum
always comes from
a rookie who

maybe bled a bit before
trying to take out his
frustrations on a snare
or hi-hat.

His demeanor
sullen--
But
angry…

As he tries to explode
in front of new renegades

who never heard of Nirvana, Gov’t Mule, or
Metallica… 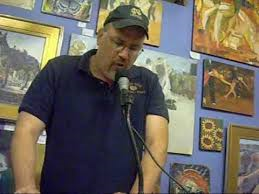 Dan Provost's poetry has been published throughout the small press for a number of years.  Some recent publications include: Ariel Chart, Poetical Review, Merak Magazine, Oddball Magazine, Deuce Coupe, Misfit Magazine, the Rye Whiskey Review, Cajun Mutt Press and the Dope Fiend Daily.  He has two books coming out in 2020.  Under the Influence of Nothingness by Kung Fu Treachery Press and Rattle of a Realizer, published by Whiskey City Press.  He lives in Berlin, New Hampshire with his wife Laura and dog Bella.
- May 23, 2021