In London during the War by Rick Christiansen

In London during the War—
The sound of dripping syrup methodically tapping a tattoo on the shelf below,
from a can of peaches pierced by bomb shrapnel
while sitting on a London apartment shelf
during the blitz.
In our plague year—
The sound of an ICU respirator
wheezing to a stop
after the code has been called.
Time of death marked by the patient’s cell phone
now unplugged and placed in the bag for her children.
This Plague year has changed us all.
Time speeding up and slowing down to the rhythms of serotonin.
Anxiety creating brilliant focused experience
like a microscope being dialed in to the cellular level.
They say that in London during the war,
people felt more alive.
The Spector of sudden death from the sky
made them love faster, drink longer, fuck harder.
In our Plague year—
We endure the Spector of slow death.
Not from the sky, but from the air.
Droplets like shrapnel piercing the lungs/slowly stealing breath away.
We only grow heavier.
Eating and watching and hiding from the miasma.
They say that in London during the War,
people died alone trapped in the wreckage of bombed buildings.
In our Plague year—
people die alone trapped in hospital beds.
Tethered to machines instead of family.
Each breath more shallow than the last, until the ragged sound stops.

They say that in London during the War,
each morning people would emerge blinking.
Wearing masks against the dust and smoke.
Marking the demise of another shop or restaurant to bomb or fire
as they navigated the minimums of life.
Picking up a prescription.
Trying to find milk or toilet paper.
Because children are still thirsty
and we must shit until we die.
Wandering for items that would fill the hole
of uncertainty and named fear.

In our Plague year— 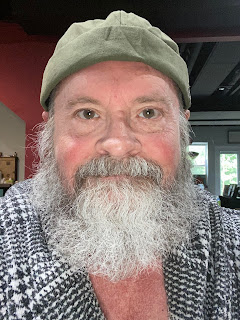 Rick Christiansen has been a stand-up comic, an actor, director of the improvisational comedy group, The Underground, and a corporate executive.  His work can be found in the archives of Oddball Magazine, Muddy River Poetry Review and other publications. He has poems forthcoming in Dumpster Fire Press and his poem “Killing Bob Dylan” has been selected for a Fall 2021 anthology by Alien Buddha Press. He is a member of the St. Louis Writers Guild. Rick lives in Missouri near his eight grandchildren and with his basset hound Annie.