Dating in the Stoned Age by Tony Pena

Fred and Wilma ain’t got nothing
on Mule and Meg making plans
for some grub and a flick.
First, catch the latest Star Wars
a month after premiere, sharing
stale popcorn at the theater
that died as a soft porn house before
reborn like Lazarus as a second run
joint with torn screen and tacky floor.
Later, Dick’s Diner ain’t romantic
but if variety is the spice of life,
the selection is sumptuous.
A thousand and one sauces
to drench a dry bird and palate
cleanser of watered down RC.
And as for the nightcap,
he could yabba dabba do her
for two hours on hot sheets.
Mule wonders, as the acrid smoke
and stink of burning weed engulfs
his Nova stranded on the highway,
if Meg would’ve come out had
the red rose he stole from Bob’s
gas station been free of blight. 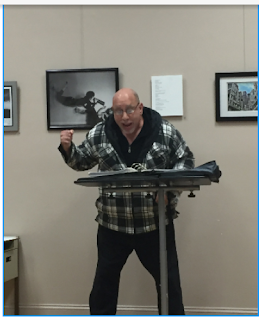 Tony Pena was selected as 2017-2018 Poet Laureate for the city of Beacon, New York. A new volume of poetry and flash fiction, "Blood and Beats and Rock n Roll," is available now at Amazon.  He also has a self published chapbook, "Opening night in Gehenna."  His publication credits include “Chronogram,”  "Dogzplot," "Gutter Eloquence," “Hudson Valley Transmitter,” "Red Fez," "Slipstream,"  "Underground Voices," "Zygote in my Coffee," and others.
Colorful compositions and caterwauling with a couple of chords can be seen at:
Www.youtube.com/tonypenapoetry
Www.facebook.com/tonypenapoetry
- March 18, 2022