Missing The Boat by Matt Amott

I filled out a postcard
addressed to my woman
and gave it to a friend
who was going to France.
I had him mail it
back to her
from the Eiffel Tower,
and she was convinced
that I traveled abroad
and sent it to her myself.
Years later she left,
never knowing the truth
about the postcard.
These days
I can catch a boat
to Europe.
Wander it's cities,
eat it's food
and drink it's wine.
I can live fully
and love madly,
and she won't know
about that either. 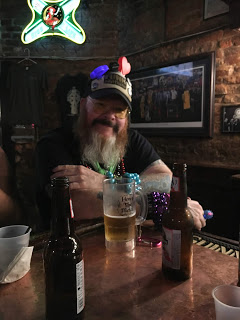 Matt Amott is a poet, musician and photographer who rambles around the Pacific Northwest. He is co-founder and co-editor of Six Ft. Swells Press and has been published in numerous collections as well as three books of his own, THE COAST IS CLEAR (Six Ft. Swells Press), GET WELL SOON and THE MEMORY OF HER (both by Epic Rites Press).  He can be reached at sixftswells@yahoo.com and purchases can be made at Amazon and www.sixftswellspress.com
- July 15, 2021