Not Within My Power by Daniel S. Irwin

It is not within my power
To raise the dead.
If it was, I’d probably
Screw it up anyway.
Raise up the wrong ones
Or raise them up
In their rotting state.
You might could make
Some money at it.
Knock, knock…
“Brought your wife back.
You gonna pay me?
What?  You remember her
With more meat on her bones?
Well, at least, she won’t be
Nagging you all the time.
What’s that?  The new wife
Won’t stand for it?
Okay, my bad.  Guess I’ll
Just take her back.
You’re sure now?
Quite a conversation piece
When the neighbors drop by.
Yes, well, maybe she’ll
Help me re-dig the hole.
Oh, Hell!  The dog’s
Running off with her leg.
Here, boy!  Here, Boy!” 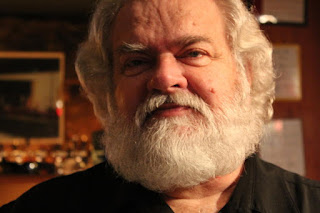 Daniel S. Irwin, native of Southern Illinois (such as it is).  Artist, writer, actor, soldier, scholar, priest among other things.
Work published in over one hundred magazines and journals worldwide.  Has appeared in over one hundred films.
Speaks fluent gibberish when loaded.  Not much into blowing his own horn as you are only as good as your latest endeavor.
Once turned to religion but Jesus just walked away.
- March 30, 2022