The day drunks inside this darkened barroom
resemble a scene from Trees Lounge
but like the George Jones song goes,
its “hotter than a two-dollar pistol” outside
so this cold beer feels like heaven
as it washes down my throat
A string of sad song country tunes
bleeds from the jukebox speakers
and I watch two old geezers argue
with the fury of a thousand Republicans
trying to abolish Roe versus Wade
about why the Giants aren’t in the World Series
There aren’t any pretty girls
to occupy my mind
but one who’s at least
twenty years my senior
slides into the stool next to mine
and tries to convince me
the romance of how it was
outweighs the romance of how it is
Two random strangers stand up
and begin to slow-dance
to a Tom waits song
while the rest of us
stare down at our drinks
wishing we had the guts 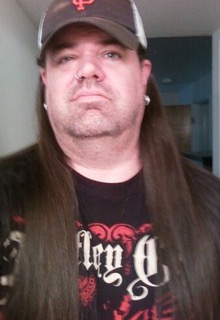 Michael N. Thompson likes bacon, cats and fantasy football.  His poetry has appeared in numerous literary journals including Word Riot, Toronto Quarterly and San Pedro River Review. He is the author of four poetry collections, the most recent being A Murder Of Crows published by University of Hell Press. www.michaelnthompson.com
- March 21, 2022