When they sewed me into the Santa suit, I should have been more concerned, but it had been almost two years since I’d been employed (prison trustee doesn’t count) and the motivational speeches given during our training were madly inspiring.  We were going to be St. Nicholas from Thanksgiving through Christmas Eve.  There were three others in my class: Melville, a lumpy teenager with Tourette’s; Ron, who looked like the Samuel L. Jackson character in “Django, Unchained:” and Tricia, who was the most convincing Santa of the group.  The four of us were to cover every Santa shift at the Northfield Mall for the duration of the war.  I mean season.
It had all gone to hell by the tenth of December.  We huddled at a back table at Freddie’s Tavern, bloodied but still defiant.
“I will cut this motherfucker off,” Tricia promised.  “Cut it off and burn it.”
“You’d lose that...SWEET...thousand dollar bonus, puh-payable December 24th,” Melville reminded her for the fourth time.
We sat in silence, which Ron eventually broke.
“Last night I dreamed I was the Easter Bunny,” he said with a cracking voice.  “When I woke up, I was so happy I wasn’t.  Then I remembered this suit.”  He began to shake uncontrollably.  Melville braced him to keep him from falling out of his chair.
I had to be the strong one.
“Two more weeks, guys.  Fourteen days.  I know how bad it is.  I’ve got toddler pee wafting up from my lap, baby puke hanging around my collar like a noose, but we’re invested in this now.  Lose the suit, lose the bonus, lose the job reference.  If we drink and don’t think, we can pull this off.”
“All right.” Ron raised his beer to his face and took a long pull.
Things seemed to calm down.  The mood became almost mellow, in fact.  Then an inebriate stopped by our table.
“Hey, fellas.  We—those of us at the bar—we were wondering: How do you guys go to the bathroom?  I mean, being sewed into those suits and all...”
We descended on him like locusts.  Like smallpox.  Like rioters after a Super Bowl.  Dancing on his fallen body like cloggers, we celebrated our commitment to this surreal cause. 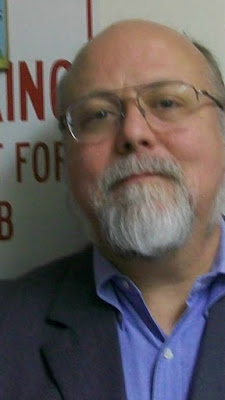 The poetry and prose of Robert L. Penick has appeared in over 100 different literary journals, including The Antietam Review, Slipstream, and 4th and Sycamore.  More of his work can be found at theartofmercy.net