Assaulted by the law for affronting the sensibilities of not so

Alone and ready to explode like a rocket in a bottle.

Flinging visions off the rooftops in San Francisco.

Surveying and adding to the surreal distraction of New York City.

the universe, audible to only a few.

He marched as a feeble foot soldier.

Rag and bone man watching the stars for a pathway home.

Scribbling in a violent rush onto the backs of dirty envelopes:

A language all his own. 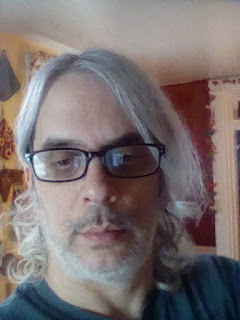 Kevin M. Hibshman has had poems published in many journals and magazines world wide.
In addition, he has edited his poetry zine, Fearless, since 1990 and is the author of sixteen chapbooks including Love Sex Death Dreams (Green Bean Press, 2000) and Incessant Shining (Alternating Current, 2011).
His current book Just Another Small Town Story from Whiskey City Press is currently available on Amazon.
- July 24, 2021